To Bore Is A Sin. Time for a Message Makeover! Take a Cue from Sultry Savannah

By Rachel on June 24, 2013 in Entrepreneurship, Writing for Business 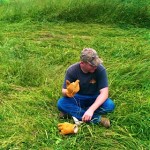 “It all started three years ago when I bought the angel,” says Toby. “The sculpted angel with wings that swept down to the floor.”

I listen, rapt. I am in Savannah, Georgia, at the childhood home of author Flannery O’Connor — one of my writing idols. She died in 1964.

“Strange things happened that week. It was March 22nd,” says Toby. “Three days before her birthday. Flannery never did like angels.”

Toby pauses, leans back against the green-painted wall of the O’Connor sitting area. Southerners take their time telling stories. They understand the art of suspense, how to create pictures in your mind.

“I woke up at 1am to the pressure of a child’s back against my feet,” says Toby. “But there was no child there.”

It’s so hot in the sitting room, humid. Everything’s sultry in Savannah. Moist with possibility. All the live oaks hung with Spanish moss make ghosts seem likely.
“The next night at 1am, I woke to a child’s footsteps up and down the mattress. The third night, I woke to a child’s finger poking at my palm.”

I don’t dare breathe. This is no ordinary tour, or tour guide.

“The last night, I woke to a bright light. In the corner stood a girl. Blinding light, but I could still make out the hair, the eyes, the teeth, a dress. It was the first time I’d seen a ghost. ‘What do you want?!’ I yelled. She said nothing, just flapped her wings like a chicken a few times, then disappeared. It was her birthday.”

This month, I visited Savannah for the first time. Everybody is a storyteller there. You can feel history in the air, and beneath your feet.

You know how sometimes you have such a vivid dream, you can’t shake it all day? I was down South to attend an entrepreneurial training conference. I road-tripped from Savannah to Myrtle Beach, South Carolina, but I couldn’t shake Savannah.

Savannah made me realize what’s missing for most entrepreneurs.

I’m sick of the bland messaging out there.

Think Novocaine to the brain. Mindfreeze.

You can’t tell one business from the next.

The writing is as flavorless as overchewed gum, as forgettable as a trip to the mall.

Would you rather watch “Bulworth” or two hours of campaign ads?

If you know what I mean, if you want to find the profit spark that ignites YOUR message, then shoot me an e-mail at info@writersonfire.com with MESSAGE MAKEOVER in the headline.

For a limited time, I’m offering complimentary 20-minute Message Makeover calls to help you fire up your message so potential clients will seek YOU out.

And I’ll share the ONE critical thing that’s keeping you from success.

Get a jump on that future book burning inside you.

Writing tip:  If you’re writing a blog post, try starting with a scene. A moment. Create suspense. THEN tie it in with your business message.

As always, we’d love to hear from you. Just comment below.

And tell us your thoughts. Was the post inspiring? Let’s get the conversation going. And let’s support each other. No holds barred!

Systems Are Sexy! Structure Will Free Your Creativity, Buy You Time and Create Wealth
From Brokeass Writer to Businesswoman — Or, How I Lost My (Two Silk) Shirts, and Still Reached My Income Goal for June (And How You Can Too!)