Are You Afraid to Step Into Your Power?

By Rachel on October 14, 2014 in Entrepreneurship, Featured, Personal, Writing for Business 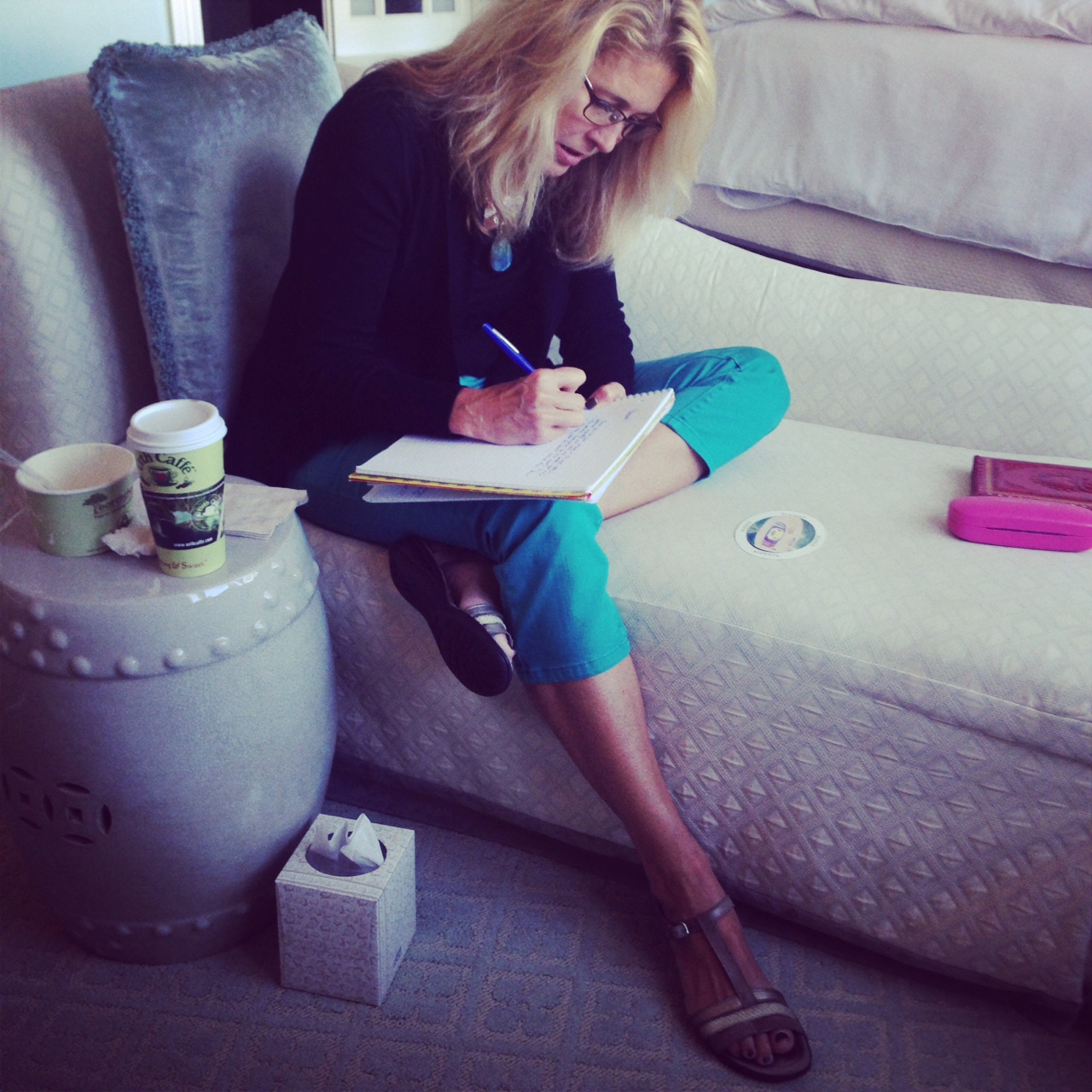 Book BlastOff client Michele Brown writes her first on-the-spot timed exercise. It’s such an honor to witness that kind of concentration, creative flow…and trust. Personal story is truly the most intimate act — to write, and to share. Whether on page or stage. Whether to one — or many.

When she read what she wrote to me — after some prodding — when she saw my tears and rapt attention — when she took it in — I saw something shift. Saw the power in her uncoil and rise. Suffusing her with light. She stepped into the power of her personal story, and authentic voice — right before my eyes.

That’s why I love these BlastOff experiences. People accelerate their growth by weeks, months…years. Michele shaved off so much time, so much struggle and reams of writing by diving in. She was prepared to speak her truth — after having lost her hearing for a terrifying period of four years. It was time to move from silence into speaking, from powerlessness into her own power. All this, before a once-in-a-lifetime trip to Antarctica — land of ice and silence — where she will go with purpose and a plan for her book-to-be.

Let’s revisit this piece I wrote in the summer of 2000 for the now defunct The Book Los Angeles (thanks to editor Patrick Kahn!). Despite the title, this goes for men too! Take this opportunity to consider what makes you feel powerful — and where you might be hiding, or holding back. Or missing the opportunity to step into the full power of your personal story.

Power bars, power lunches, power yoga, power brokers, power suits, power bras — power ras? What do you think of when you imagine women and power? Voodoo dolls and gun molls? Bloodlusting, barebreasted Amazons? Stars firing their directors? Blissed-out earth mamas? Lipstick politicos? Dot.com dames? THE BOOK asked L.A. women what made them feel pwoerful. We tried for a spalsh-mix of blue-collar, white-collar, young and old, black white brown yellow purple and green — a samplig of L.A.’s dizzyingly diverse populace. Read on, and see if your own sense of power cranks up a notch.

“I exert my power vebally. By twisting my words around a turn of phrase. When it sings over the plate, when I hit it out of the park, I win the war of the words and feel free.”~Carrie Fisher, writer, actress.

“I’ve grown up with the idea of being powerful because of my size, so it was about embracing that size at age 17 or 18. I feel most powerful when I’m not fighting it.”~Gabby Reece, beach volleyball player.

“I’m 3’10” and I’m a strong little bitch. When I cook, I have to climb up on counters. When I clean the house, I have to get a ladder. When I do everyday things I have to do double-duty, and I do it. I do what the average person can do. That’s my power.”~Cindy Sorensen, little person actress.

“I don’t like the concept of individual power. I create power by corraling the powers of individuals together, and organizing them. If someone’s exerting power, it’s usually over someone else, and inherently there’s something exploitative about that.” ~Triana Silton, labor organizer, Local 1877, Justice for Janitors strike.

“Power is having writers for glossy magazines call you up and ask you what your definition of power is. You exert power by making them wait for your answer.”~Ann Beatts, comedienne, writer

“Motherhood. Giving birth with a fifty hour labor and no drugs made me feel powerful, and how amazing it is to be a woman and to be able to do that.”~Rosanna Arquette, actress.

“When you go on a critical patient call, you are basically God. You have the power to save someone. I don’t have to be a wife to be a functional person in this world. I don’t have to have kids to be productive.”~Pat Morse, veteran paramedic.

“Knowing that I own the room. Stalking the stage in my kickass go-go boots, singing like a woman possessed.”~Erika Amato, lead singer of Velvet Chain.

“What really makes me feel good and powerful is God in my life. he gives me strength.”~Maria Martos, immigrant from Nayarit, Mexico, mother, bus driver.

“I feel very powerful because I always know when I have a rip in my pants. I can squeeze into places no one else can. I fit in a duffel bag with my legs around my neck.”~April Tatro, contortionist

“When I was sixteen, I gave birth to a baby boy with missing heart chambers. He lived until the day before his first birthday. I became anorexic after he died. I don’t know how I got through it but seeing my son fight for his life made me hold on to mine. The strength my son gave me makes me a powerful woman.”~Dale Lopez, peer education/HIV counselor at L.A. Free Clinic.

“As a garment worker and a woman, I know I have power because I have made an impact. I have defended my own rights and fought for respect for workers. I have also struggled to raise a family and work full-time. We women are strong when we value ourselves.”~Graciela Ceja, garment worker 18 years, Mexican immigrant.

“Some days a pair of Manolo Blahniks. Nice and spiky! How do I exert my power? Y’know…I”m a W-O-M-A-N! WE are already powerful from the moment we’re born. The best use for power is to show understanding and compassion through thoughtfulness. I’ve learned that from being a mother.”~Trudie Styler, producer, actress, activist, wife of Sting, mother.

“Power rests gently in my hands. There is no-one who can see these hands, beautifully gloved in the blackness of my kins, there is no-one who can watch them curl tightly into two defiant fists, andtell em that history does not hold them as a symbol of power.”~Meri Nana-Ama Danquah, native of Ghana, writer, editor.

“Being in the ring, feeling the ropes, the mat beneath my feet, picking up my opponent, slamming her to the mat and going for the pin. The hands of the fans reaching out as I make my way to and from the ring.”~Rio Storm, professional wrestler.

“Knowing that we (people, things, earth, all beings) are all Equal AND all Different. How do I exert my power? Ouch! It’s tough living from that place!”~Sensei Wendy Egyoku Nakao, Abbot of Zen Center of Los Angeles.

“Most of us don’t say, I feel powerful — not in the main. though I do realize I am powerful because of what I represent as a very active and productive woman of my age — which is creeping up there.”~Angela Lansbury, actress.

“I don’t feel that we ourselves ‘generate’ power. I feel that we channel the energy available in the world. i feel most powerful when I feel least ‘I’ — when I’m just a conduit.”~Janet Fitch, writer.

“Every time I put a needle into a patient, I imagine I am releasing dammed energy from a river. When a patient yells and screams, energy releases and is restored in a patient’s body.”~Dr. Victoria Liao, acupuncturist, herbologist, chiropractor.
I am my happiest when I surf. When I’m able to blend the power of the ocean with my own.”~Ashely Sherwin Lloyd, top female longboard surfer.

When I think of whatt makes me feel powerful, I remember smashing girls’ shins with my hocket stick, tackling women on a muddy rugby field, beating a friend in arm wrestling. I thin of clompinag around in beat-up combat boots; speed-driving a cherry-red metallic pick up in sexy clothes and high heels. Exhibitionism. Anger. My tongue as branding iron. My words a fiery plague. men desiring me. Money. Escaping traps, changing. Eating fear. Traveling far away. Not staying still Staying still. What makes you feel powerful?

Strange to read the words I wrote about what made me feel powerful 14 years ago. I barely recognize that woman. Now I get a chance to revisit, to re-vise my sense of power. I invite you to do the same.

I would love to learn this:

What makes you feel powerful?

Are you afraid of your power?

Blood Moon Rising — Are You Suffering Personality Eclipse? Try the Confidence Cure!
Dia de Los Muertos — How to Wake Your Business from the Dead!