Stereopathetic Soulmanure, or, How A Beck Interview Can Crack Open Your Business

By Rachel on January 28, 2014 in Entrepreneurship, News, Personal, Writing for Business 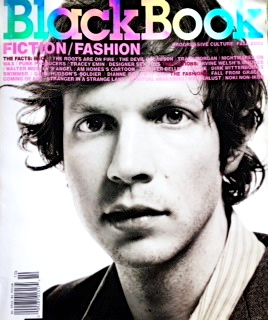 Like Alice B. Toklas, Beck prefers to sit with his back to a good view. After introducing himself and putting on a Mingus record, he sits in an acid-orange chaise longue with matching footrest. The two arched floor-to-ceiling windows behind him provide a spectactular panoramic vista of the placid Silverlake Reservoir. The air conditioning is the right temperature for a meat cooler.

“LA’s a place I can come and shake the dust off,” he says of his hometown. In Beck’s drowsy, Cali-inflected voice, there is no trace of the world-weary folk cowboy of the latest, as-yet-untitled album, or the funkadelic soul man of Midnite Vultures. “It’s such a great nonplace to live. All the experiences kind of dissolve into the slowness. In a stimulating world, it’s a nice place to unstimulate.”

The white stucco walls of his Spanish-style house are adorned with lots of artwork, including many pieces by his priapic, Zorba-style grandfather Al Hansen, one of the founders of the Fluxus movement and a colorful character from whom Beck learned to rhyme and talk ’40s-era hipster jive. Al made collages of the Venus of Willendorf out of garbage — matchsticks, cigarette butts, candy-bar wrappers, girlie-mag pics. I sit on the edge of a mod ’50s white couch, my shoes slipping on a blue-green shag yarn carpet that’s vaguely reminiscent of the Jungle Room at Graceland. On the far wall is a bandanna Valkyrie. Over the fireplace is a fertility goddess made of cigarette butts.

Beck himself harvested some of the materials for the goddess. At age eight, he and his younger brother, Channing, went on a walk with Al all over Hollywood to find the discarded ends. Each of them carried a plastic shopping bag. They didn’t return until they were full. With a fistful of stinking butts in one hand and a blank canvas before him, Al had an epiphany: He was an alchemist, converting shit into gold. Excrement piles up in earlier Beck lyricis — one album’s even called Stereopathetic Soulmanure. So does trash — garbage pail skies, rubbish piles fresh and plain, screaming garbagemen, trash-bag kids. Both fertilize Beck’s surreal soundscapes, as did his grandfather.

Though Al died in 1995, he and Beck recently had a joint art show that celebrated Al’s work and its cross-generational, pollinating influence on Beck’s music. Beck himself has been called a junk man, for his habit of using found bits of pop culture in his own music. The Fluxus movement believed that combination and fusion were where it was at, and all media and art were fair game. Combining elements of Bauhaus, Dada, and Zen, it had big ideas, but they were always sauced with burlesque. They never took themselves too seriously…

In person, this prolific and protean artist has rock star presence. Part of it is due to this diary-fresh skin. He looks shockingly youthful for 32. A peodphile’s dream with a long shelf life. A thinking teen’s pinup boy. With his Swede-Norwegian visage, similar to Northern Italian, he could be a Borghese princeling with homecut blond hair. His look is compelling — intelligent but remote, eyes observing everything but also enjoying a private joke — and he seems lightly perverse, or at least mischievous, behind a formal politeness. He radiates a mellow self-containment. Almost feline…

…If Beck were a mall, he would be at least a triplex. He talks animatedly about the strange abandoned-mall epidemic. Because developers keep building new designs, they abandon old malls. “I think it would be great to have a mall that looked like stores but you weren’t selling things,” he says “You were just going to hang out or do things. Or if somebody bought a mall and turned it into a house that people could kind of come to and you could build rooms, and it’s all orange furniture. Or you could just build environments. Reclaim a mall just in the name of aesthetics or to make something beautiful or something that has no real purpose. Wouldn’t that be amazing?”

When Beck talks about performing, it’s a helter-skelter moment, joy-filled, unalloyed, and unmediated. He takes off his aviators for the first time. His eyes are rinsed-clean hydrangea blue and huge. Striking. Hypnotic in their appraisal and blankness – not a Warholian blankness, but one that seems to come from self-control. Behind them the satellite thoughts are busy spinning around planet Beck, but they are not all for public consumption.”

This is just an excerpt from a lengthy cover story profile I did in 2002 for Black Book magazine. The ever-generous writer Jerry Stahl (the bestselling memoir and then movie Permanent Midnight, the recent smash HBO movie “Hemingway & Gellhorn,” among many other works) sent me the gig. I said yes, but I was terrified.

I had only one day and one night to prepare — and I’d never listened to Beck’s music. All I knew was “I’m A Loser.” So I ran out, bought all his music and immersed myself in the sounds. The lyrics. The album he was putting out was later named Sea Change.

And it was. A simple and wrenching album. A melancholic, aching suite of songs written in the wake of a breakup. Sea Change was a stark contrast to his music before, which was more layered and humorous.

How about you? Do you feel like you’ve outgrown your current business model? Maybe you’re sick of your products or programs and now it’s time to create fresh. Are you willing to make a Sea Change in your business?

Something else popped out. Beck’s use of trash. His cultural referencing. His grandfather’s literal appropriation of the mundane. Is there something you’re overlooking that’s right in front of you — that could be woven into your messaging? Your story?

I read through this profile of Beck, and I’m struck by how much attention I paid to surroundings and to him. How deeply I immersed myself in Beck’s work — and how carefully I mined our time together, our taped conversation — and all the details I’d noticed.

How mindful are you when you are speaking with prospects? Do you carry that forward into your conversations with clients? Do you see parallels in how you engage with friends and family?

Something I notice in revisiting the piece is how I made sure that there was one moment — where the persona of Beck slipped. And a secret self was revealed — even if only a tiny glimpse. This is when Beck removes his aviators and talks about the joy of performance.

That is something I strive to create an opportunity for in every interview — and every conversation with a potential prospect or client. The chance to be real. It requires deep listening. Sometimes the clues are in what’s not said.

Do you do that? Do you try to create that opportunity and space for true connection?

Observing a seasoned celebrity like Beck, and how he handles himself, is also helpful to our own journey as entrepreneurs navigating the dimensions of Public, Private, and Personal. That’s something I’ll address in more depth in another ezine. For now — it’s interesting to consider how well he balanced between spontaneous quotations — yet avoided the emotional rawness of his then recent breakup. That he had chosen instead to pour into his album Sea Change.

How about you? Have you clearly defined what is Public? What is Personal — things you reveal to your tribe that reveal more vulnerability. And what is Private — or off limits to everyone but your inner circle?

Something to note for the sake of writing, and speaking — is how I made sure to ground the interview in space and time. I located Beck. And you. And me. I keep telling clients this is critical at the outset of a story — whether on the page, or stage. Paint the picture of what planet we’re on — the specific space and time — so we can enter into the setting with you.

So we, too, can have the experience.

I hope you enjoyed this tete a test with Beck — the excerpts from the much longer interview — and the insights drawn from it that might help illuminate pieces of your business.

Let us know! We are here to support you — and to engage in conversation.

Physical Text — What Your Body Can Teach Your Business
Are You Ready To Heal? Unleash Your Success In Business Through Radical Self Love

One Response to Stereopathetic Soulmanure, or, How A Beck Interview Can Crack Open Your Business